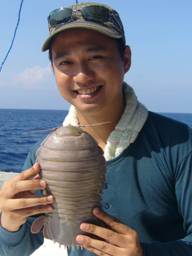 Title: The Xanthidae of the Philippines, with a systematic revision of the subfamily Euxanthinae Alcock, 1898 (Crustacea: Decapoda: Brachyura)

Xanthid crabs (Family Xanthidae) are a large, diverse group and are well represented in marine reef communities worldwide. They comprise one of the most species-rich families within the decapod crustacean infraorder Brachyura (the true crabs), with at least 640 species and still counting. The taxonomy and systematics of xanthids have been regarded by many workers as very complicated, and, as a consequence, this group has undergone substantial re-definition and re-organization over the past 170 years. However, the present system of classification remains imperfect, particularly in the definition of the component subfamilies.

The xanthid crab fauna of the Philippines, which remains poorly known, is reviewed. Recent expeditions to the country have made it possible for an updated checklist of the Philippine Xanthidae to be compiled, the last comprehensive checklist having been published in 1959. The present additions contribute the largest increase in the number of xanthid species recorded from the country since the beginning of marine zoological exploration in the region. Most of the additional species are from the central Philippines, and were collected by the PANGLAO 2004 and 2005 expeditions. A total of 213 species, distributed among 78 genera and 12 subfamilies, are recorded. Of these, four genera and 15 species are new to Science, whereas 53 species, 13 genera and 1 subfamily are new records for the country. The prevalence of rare species and the high rate of discovery of new species from a small island in the central Philippines (notably Balicasag Island), presents an opportunity to study the decapod crustacean fauna of this well-explored area. It appears that such taxa previously thought rare were not properly sampled due to limitations in sampling gear and the resultant neglect of hard-to-reach, therefore unexplorable, habitats. There is the possibility, therefore, that some rare species are classified as rare because the optimal habitats, where they have a higher abundance, have not been properly sampled.

One of the larger xanthid subfamilies, Euxanthinae Alcock, 1898, is revised. On the basis of previously under-appreciated morphological features, Euxanthinae is hereby restricted to 11 genera, including the type genus, Euxanthus Dana. The genus Glyptoxanthus A. Milne-Edwards is shown to possess enough distinct features to merit its recognition as a new subfamily, Glyptoxanthinae. Ladomedaeidae Števčić, is taken out from synonymy under Euxanthinae and placed under Antrocarcininae Ng & Chia. The remainder of the Euxanthinae sensu lato is also placed in Antrocarcininae on the basis of shared characters and, consequently, Antrocarcininae, now with 21 genera, is re-defined. The genera Medaeus Dana, Pseudomedaeus Guinot and Ulmo, gen. nov., are shown to be quite distinct from either Euxanthinae or Antrocarcininae, and are considered incertae sedis for the time being, pending a revision of the entire Xanthidae. This new system of classification is strongly supported by a molecular analysis of the Xanthidae (including Euxanthinae sensu lato), using four molecular markers. Five new genera and 12 new species are described as a result of this revision.

One thought on “PhD Defence Seminar: Jose Christopher E. Mendoza on the Xanthidae of the Philippines”