I spent the first of four days in a wilderness first aid training course with colleagues from the Department of Biological Sciences (aka NUS Biodiversity Crew). This course brings everyone up to speed and prepares us for difficult situations in the field.

Ted, Amy, Morgany, Poh Moi, Frank, JC & Tommy were able to make it today and already this group makes me feel confident about student care on local or overseas field trips. Many of us have had some first aid training, either formally or from field situations. However, our exposure to incidents have been relatively low (thankfully so) hence the need for a refresher.

It is excellent that we are working together and we are having highly interactive sessions with the trainers from ARIS Integrated Medical an experienced group who are glad to work with a field-savvy group.

Group scenarios have been productive and the many hands working together here has been efficient, communicative and builds an appreciation for each other. It took years for Tommy to secure the funding and get several of us together for four days, so this is a precious experience. Certainly the FTTAs, LOs and lecturers in a field module should work together again like this in future.

This one-week E-waste recycling exercise is part of Dr Amy Choong’s efforts for her GEK1515 Environmental Biology students.  To make it convenient to staff as well, she has invited Cimelia staff to install two bins at these two locations (Utown Education Resource Centre and between S2 & S3) for a week so that you can also dispose of your e-waste.

Please make use of this opportunity to get rid of broken appliances.

“This pilot e-module, “Preparing for Successful Oral Presentations”, is the first of a 4-part series, developed by CDTL in collaboration with CELC and is aimed at providing a self-assessed e-learning module for students to learn useful techniques and strategies in Oral Presentations.

The following learning activities are included in the e-module:

Will include this in weblinks for LSM2251 Ecology and the Environment and LSM1303 Animal Behaviour, both of which feature a student symposia. 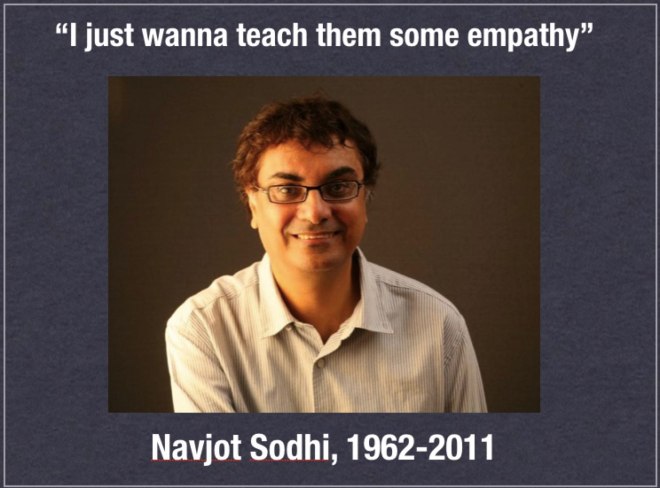 Yesterday morning, I delivered the introductory lecture to this academic year’s LSM1303 Animal Behaviour module for non-biology students. I explained to students that the original course for zoology students was initiated in the 90’s by a fresh-off-the-boat Navjot Sodhi.

He applied himself energetically to his teaching when he came and initiated the Animal Behaviour course for biology students. When we recce-d Tioman for the honours year field course (with Tommy Tan, obviously), I discussed with him many issues about NUS. Amongst the things I shared was how undergrads were unfamiliar about the peer review process – to my surprise when he got back, he initiated a review paper assignment with two peer reviews by fellow undergrads using pen-names and corrections by authors – and he marked all of it! And he did this for several years.

I remember sorting the papers with Adrian Elangovan and Marjorie Castelletta and we were all impressed by the amount of marking he was volunteering to do. His desk was littered then as it was at the end, and teaching contributed to a fair share of the mess.

So he was energetic about teaching when he first came, as he would be come to be known with research later. He certainly invested more than a mild interest in this professorial duty. And he didn’t want to be pinned down by the rigidity of a rubric during assessment, but wanted to a flexible system which allowed us to be responsive to interesting ideas or perspectives which students might unearth.

Zeehan Jaafar was then an undergrad and experienced the course, both the first and third year versions. She would later say, “We were one of his first students and lectures with him were never dull; always filled with groans and laughter – groans from the students and laughter from him, either at us or at his own jokes!”

In 1998, I learnt from Andrew Tay over at the Nature Society (Singapore) that African carnivore filmmakers Derek and Beverly Joubert would be at the National Library (now the Stamford Road hole in the wall) to talk about their work and unveil one of their National Geographic books. Fascinated by their film Lions and Hyaenas, I asked Sodhi if I could hijack his forthcoming lecture. He readily agreed to throw out the lecture and we screened the video and had a short discussion about the film with students.

At the library later, I realised a few students had gone down to listen to the Joubert’s, including Zeehan. The Joubert’s were thrilled we had used their film (even though it was a musty video taped off television by Kelvin Lim of RMBR) for they wanted the message of understanding Africa carnivores to get out. This had been possible because Sodhi was enthusiastic and opportunistic about learning opportunities. He understood that there were many ways to learn and contribute.

I went over the Raffles Museum of Biodiversity Research full-time in 1999 and regretfully stopped TA-ing the course. In 2004, however, some museum staff were roped in by the faculty to teach and Sodhi laid claim to me to co-teach LSM1303. I observed a couple of his lectures and as when I began, tried to complement Sodhi’s style somewhat. I slowly edged up the content and grappled with the module outcomes – how much should we expose students to? What message should they leave with?

By this time, Navjot was, as Zeehan would later say, a superstar conservationist. But he knew we needed more than research alone, that we needed many and all sorts of hands on deck to cope with the sixth extinction. In one of our corridor discussions, I remember, and this plays like a video in my mind, he shook his head slightly as if to dust off the many elements of the discussion and mumbled, “I just wanna teach them some empathy”.

I was struck by how emotive and frank that was.

About a year after that, he said he was going to leave the course to me. I had known this was coming for he had wanted to leave earlier, even though I settled all the admin, which he abhorred mightily. However, he needed time to cope with his voluminous output of research papers and book chapters and so it was time. He was amused when I expressed regret that young students would not get exposure to his strange manner and outlook!

But he knew when to let go. So first Matthew Lim and now Zeehan Jaafar co-teach the module with me. Thereafter, I’d update Navjot when I saw him in the corridor or car park every now and then about what I was doing with the course. During his last lecture, for example, he exposed students to the scientific approach with which he had addressed the crow problem. I had retained that but amplified it to an urban animal-human conflict lecture with chapter additions about the common palm civet, long-tailed macaque, stray cats and wild pigs, partly from our research projects. Meanwhile, the symposia now demanded of students a research question, had them study wild, not captive animals, lecture notes they were given included some mention of journal sources and I made them blog.

Navjot was supportive of the changes and appreciative that I said his statement about empathy was central to the module objectives still – to teach students some empathy through knowledge and appreciation. I also shared about how I’d tell students about him, that quirky professor who’d make them chuckle – heck, I even kept some of his awful blue slide backgrounds as a hat tip and tell students it was his gawdy colour sense, not mine. Every year I’d hover over the delete key and decide against removing that characteristic blue. It was what you said which counted anyway.

So yesterday, some 200 students learned we are not soullessly teaching animal behaviour. Yes, we are certainly curious and fascinated by the subject, and believe in testing, repeatability, mensuration and the rest of it. But we also care about animals and the planet and believe that all our students can help do something about it – and probably in ways we are unable to.

RIP Navjot, you are always remembered.

They will receive their awards from the Dean of Science, Prof Andrew Wee on Wed 16 Nov 2011.

Graduate students are invited to apply for part-time teaching positions in the following modules for AY 2011/12 Semester I:

Closing date: 3rd August 2011.
You will be contacted about your teaching allocation then.

The Biodiversity Crew @ NUS
Create a free website or blog at WordPress.com.