For more information about the Museum Officer opening, visit the job opportunity page at News From Lee Kong Chian Natural History Museum. The closing date for applications is 10 October 2014.

We are playing catch-up on news about Seshadri, one of the PhD students in the Evolutionary Ecology and Conservation Lab who is back in Singapore after spending the summer in India doing field work.

Seshadri’s master’s research on the effects of selective logging on frogs in the Kalakad Mundanthurai Tiger Reserve was recently published in Biotropica and featured on the conservation website Mongabay.com. The reserve is part of the Western Ghats, which along with Sri Lanka is a biodiversity hotspot that is home to many threatened endemic amphibians. Seshadri found that negative impacts on  densities and community composition of anurans persisted in logged forest even 40 years after moderate logging was ceased.

The degradation from logging has led to the loss of ecological niches – particularly affecting stream- and litter-dwelling species. It appears that anuran assemblages in the region do not recover quickly from habitat degradation due to logging.

Seshadri will continue to work on threatened amphibians in the Western Ghats for his PhD dissertation, focusing on the ecology and behaviour of bamboo nesting frogs. His research will be supported by the Mohamed bin Zayed Species Conservation Fund and Chicago Zoological Fund, which are competitive grants awarded to conservation efforts to save species worldwide.

” Modelling infectious disease emergence in the context of conservation, economics and development”

Abstract: – Infectious diseases are emerging in real time, with the current epidemic of ebola in West Africa taking the headlines at more than 1,900 human deaths over the course of March to September 2014. Infectious disease emergence is a field that spans studies of wildlife, domestic animals, and humans, and is not only relevant in times like this, but also globally important in times of non-crisis. Overall, I will study the linkages between ecological and human systems to understand how these connections and interactions may affect risk of emergence, and ultimately how control and policy may fit in. Factors that are drivers of disease and dynamics may be affected by aspects and behaviors of both human populations and animal populations. The goal is to characterize and manage risk by examining connectedness, risk, and control allocations or actions that may be contributing to disease emergence. In order to capture how various factors may impact risk, this proposed PhD thesis approaches the modeling of the emergence of infectious diseases from multiple scales: global national, continental spatially explicit, regional, and landscape. In the first chapter, global official development assistance will be collated and compared with risk of emergence. The second chapter will look at Africa land use projections as a result of economic development and other ecological factors to understand how development activities may be managed to reduce future risk. The third chapter examines the trade connections in the Southeast Asian region, an area that may be considered a hotspot for biodiversity and development as well as disease emergence. In the last chapter, a case study in Thailand is proposed that follows human movement and connects it to mosquito sampling and clinical records of dengue and malaria in people. 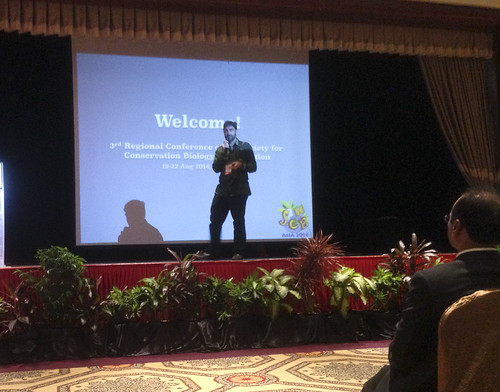 Marcus Chua reports the list of NUS Biodiversity Crew and alumnus who presented or was present at the 3rd Asia Regional Conference of the Society for Conservation Biology – Asia Section – what a party!

Let me know if we missed anyone. Marcus also made a great effort to tweet updates to those of us stuck in campus and has compiled his posts, as well as those of others in this Storify compilation.

Photos by Marcus Chua. Thanks Mary Ruth and Mingko for a bunch of updates!

The Sundaic region is recognised as one of the top 5 leading biodiversity hotspots. Because of its geographical complexity and the periodical connectivity of its landmasses due to sea level changes during Pleistocene glaciations, this region is particularly interesting for the study of diversification mechanisms.

Recent studies have shown complex patterns of genetic variation among populations of different landmasses in Sundaland, giving insight that some of those populations may in fact no longer experience gene flow between one another. The study of pattern of gene flow across landmasses in this region during the past ice-age is therefore a unique opportunity to better understand the differentiation and speciation mechanisms of Sundaic biota. Additionally, this region also shows the highest deforestation rate observed among tropical regions.

Habitat conversion reduces population sizes and connectivity between sub-populations. Singapore, which has gone through an extensive loss of natural habitat, is a particularly interesting location to study how habitat modification affects gene flow and connectivity within populations. Since understorey birds are very sensitive to habitat modifications, they are an ideal model to study diversification as well as the effect of habitat modification. To investigate intra- and inter-population genetic variation, we are using new molecular methodologies such as Restriction-site Associated DNA sequencing (RAD seq) methods, which provide high-resolution population-genomic data.

NUS’ Office of Environment Sustainability is organising an inaugural electronic waste (“e-waste”) recycling drive in NUS on Friday 12 Sep 2014: 10am – 4pm. Anyone can drop off their e-waste at the NUS University Town near the bus stop and if you are driven through, there is a drop-off point at the Stephen Riady Centre.

This e-waste drive ensures your unwanted electronics / electrical equipment and accessories are disposed off in a safe and environmentally responsible manner. Let your friends know. and make good use of this inaugural e-waste recycling drive in NUS.

This free recycling is provided courtesy of Apple.

I see they offer shredding of hard disks, so peace of mind ensured for your data on old hard disks. See OES’ Facebook page for more.

If you are unable to make the date, there is existing e-waste recycling locations in Singapore offered through Funan Digital Mall and Starhub – see details at the NEA webpage.

Abstract: – Anthropocene defaunation has been taking place rigorously for 500 years, and turtles are one of the most endangered vertebrate groups suffering these effects. The endangered Burmese roofed turtle, Batagur trivittata, is endemic to Myanmar and has the second smallest wild turtle population in the world and is one of the least studied species.

There have been ongoing ex-situ conservation efforts for a decade, which led to a growth in the number of captive animals in Myanmar. The ultimate goal is to reestablish self-sustaining populations in their natural ranges. To achieve this, there is an obvious need for input from quantitative and multi-disciplinary approaches to formulate conservation management strategies.

This study has three phases, which aim to construct a strategic framework to “maximize conservation benefits while minimizing the risk of unintended consequences”. In the first phase I will study the conservation genetics of the Burmese Roofed turtle. I will construct reintroduction and assurance colonies by choosing individuals based on genetic indices, quantify the degree of genetic bottleneck experienced by the species, and conduct paternity analysis to shed light on the breeding ecology of this enigmatic species. In the second phase, I will conduct social surveys at potential release sites and evaluate the level of awareness and attitudes of local people towards turtle conservation efforts, aiming to contribute to conservation decision-making process and future conservation education schemes. In the third phase, I will build habitat suitability maps based on turtle nest location and use these maps to guide potential future field surveys and suggest a quantitative alternative for qualitatively assessed potential reintroduction sites.

Overall, I will study a broad spectrum of questions on the Burmese Roofed turtle, extending from genetics to reintroduction to fill the gap between ex-situ and in-situ conservation attempts. This multi-disciplinary approach will enhance current conservation practices of the Burmese roofed turtle and guide future conservation efforts for other endangered species.