Global phylogeography of pantropical plants with sea-drifted seeds: The case of Hibiscus and Rhizophora

Abstract: “Pantropical plants with sea-drifted seeds” are widely distributed plants in the littoral areas of the tropics worldwide whose seeds can drift in sea water. The species integration throughout the amazing distribution range has been explained by their enormous capacities of seed dispersal. However, there is no empirical data to indicate if dispersal by sea-drifted seeds is sufficient to maintain the genetic unity of these species throughout such a wide distribution range.

To address the importance of sea-drifted seed dispersal for the speciation and integration of the pantropical plants, I and a few collaborators collected several thousands of samples from about 30 countries. I performed phylogeographic analyses and population genetics to investigate genetic structures in Hibiscus tiliaceus and its allied species (Malvaceae), and genus Rhizophora (Rhizophoraceae).

The phylogenetic tree of cpDNA sequences in Hibiscus tiliaceus suggested the possibility that recurrent speciation from H. tiliaceus has given rise to all of its four allied species (Takayama et al. 2006). These results impliy that widely distributed plants could be the source of speciation for ones with limited distributed. Both the distribution of cpDNA haplotype and population analysis using microsatellite markers suggested that substantial gene flow via long distance seed dispersal has occurred among populations within the Pacific and Indian Ocean regions (Takayama et al. 2008). Gene flow by long-distance seed dispersal is actually responsible for species integration of H. tiliaceus in the wide distribution range.

On the other hand, clear genetic structures of cpDNA haplotypes were observed between populations over American continent in Hibiscus pernambucensis. The presence of the cpDNA haplotype largely shared in Atlantic region by H. tiliaceus and H. pernambucensis indicate the occurrence of cpDNA introgression between these two species across the Atlantic Ocean.

Clear genetic diversifications between populations over American continent were also found in Rhizophora mangle and R. racemosa. The common patterns of genetic differentiation indicated that the American continent could be a clear geographic barrier that prevents gene flow by sea-dispersal for pantropical plants with sea-drifted seeds.

Other recent results obtained from nuclear gene analyses will also be introduced in the seminar.

About the Speaker: – Koji Takayama received his Ph.D. from the University of Tokyo, Japan where he investigated the phylogeopraphy of pantropical plants with sea-drifted seeds, Hibiscus tiliaceus and its allies. The plants have an extremely wide distribution that may be achieved by dispersal of their sea-drifted seeds. During this period he carried out field surveys over five continents and molecular work using cpDNA and microsatellite loci, and revealed the global genetic structure of these plants. He then became a post-doctoral research fellow in Chiba University, Japan and is working on a phylogeographic study of widely distributed plants, especially in mangroves.

The Department of Biological Sciences is inviting applications for the post of Full-Time Teaching Assistant (FTTA) in Life Sciences undergraduate courses, in the field of Biodiversity and Ecology.

Candidates should preferably possess an Honours Degree but exceptions may be made for degree holders with relevant expertise and industrial experience.

The FTTA will be working with a team of professors and laboratory officers to achieve holistic goals for student education in NUS. The FTTA must be reasonably competent with data management and administration, comfortably manage and consult peers, be understanding of student issues and have a passion for teaching and field work.

The specific duties of the FTTA include:

The appointment will commence in July 2010. This appointment is a 1-year contract which is renewable based on performance.

Interested candidates are invited to apply with cover letter and detailed curriculum vitae, together with letters from three referees by 23rd May 2010 to:

Congratulations to all four presenters for a job well done!

There’s a short write up of the “An Evening Dedicated to Conserving Singapore’s Biodiversity” event on the NUS website! You can access it here. It focuses on the work that Andie has been doing over the past 1.5 years with regards to the banded leaf monkeys.

For those who want to  see a bunch of photos of the excitement, the DBS website has devoted a page to them here.

Thanks a lot to all the honours students who put up their posters for the event! They certainly helped to attract a lot of positive attention. 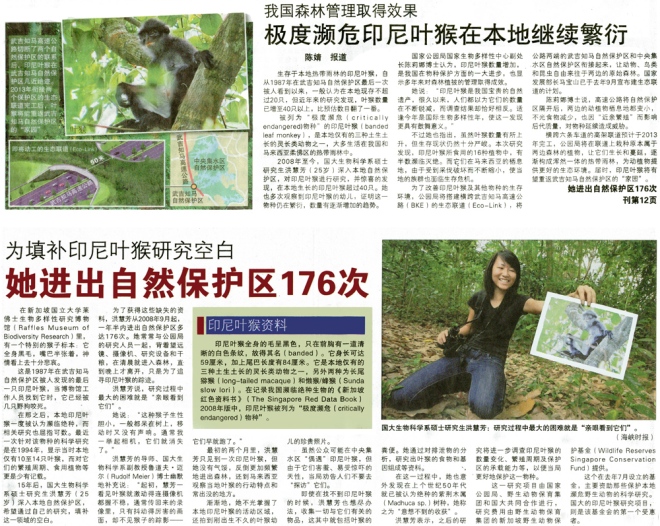 As with this post, Andie and her monkeys were also written up in the Chinese newspaper, the Lianhe Zaobao. Here’s to furthering awareness about banded leaf monkeys, their behaviour and infant coloration among the chinese-newspaper reading Singaporeans!

She will be speaking about her monkeys later in this evening. Register quickly!

Education Officer at the Raffles Museum of Biodiversity Research
Posted: 15 Apr 2010; Deadline: 07 May 2010

The Raffles Museum of Biodiversity Research is inviting applications for the position of Education Officer to assist in its education and outreach programmes.

Interested applicants are invited to submit a cover letter and CV to Ron Yeo at ronyeo@nus.edu.sg by 7th May 2010.

An Nee has wangled up another of her lovely posters for this Friday’s public lecture which will feature talks on the banded-leaf monkey in the central catchment, the greater mousedeer in Pulau Ubin, common palm civets in Siglap and endemic freshwater crabs in Singapore’s forests.

To register directly, go to http://evebiod.rafflesmuseum.net/. For details about the event, see the DBS Webpage 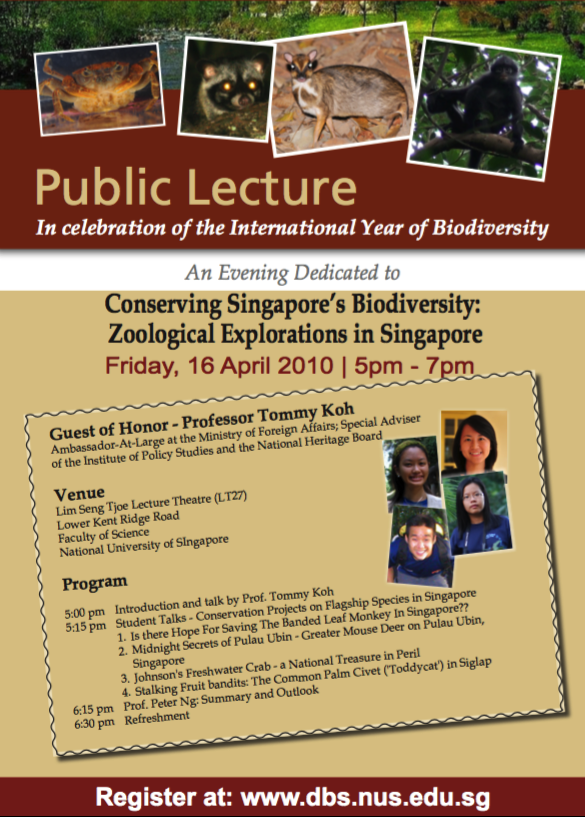 See this post for background behind this heart-warming photo.

NUS’ Andie Ang spent 11/2 years tracking the monkeys. She found, among other things, that their offspring’s definitive colour is white, not orange as reported. — ST PHOTO: NEO XIAOBIN

ONCE feared to be on the brink of extinction, data has surfaced to suggest that Singapore’s banded leaf monkey population is healthy and is, in fact, growing.

A student from the National University of Singapore (NUS) who spent 11/2 years tracking the black monkeys in the Central Catchment Area has concluded that the number is roughly treble of what was previously thought to exist.

The last reliable data, recorded in the 1990s, reported that there were 10 to 15 of these shy tree-dwelling monkeys left in Singapore.

But Miss Andie Ang, 25, has documented evidence to prove that there are at least 40 roaming the MacRitchie and Lower Peirce Reservoir areas. From September 2008, she spent five days a week in the forest to gather data for her master’s biology programme. It took 13 dawn-till-dusk sorties before Miss Ang found the first monkey and she has since seen at least 40 individuals.

By carrying out simultaneous surveys with help from a National Parks Board (NParks) ranger, she could determine that she was seeing different monkeys and, therefore, had a good population count. ‘I was pretty surprised to find 40. I don’t want to stop this work, I hope to see what can be done to stabilise the population,’ she said.

But it is unclear whether the increase in number is because the population is recovering or because previous surveys were not as comprehensive. The data collected, which covers social, breeding and eating habits, will go into Miss Ang’s master’s thesis, to be completed in July and submitted to journals for potential publication.

Associate Professor Rudolf Meier, who is supervising the project, said this was a significant study but it was hard to predict if the number was big enough for the population to recover. ‘There is a genetic bottleneck – the genetic diversity is low,’ he said. This lack of diversity could lead to vulnerability to disease or reproductive problems. ‘Also, the infant mortality rate is extremely high for these monkeys – probably more than 50 per cent.’

Deputy director of the NParks’ National Biodiversity Centre, Dr Lena Chan, said more had to be done to boost future conservation measures. ‘This species has special significance for Singapore as it was first described here in 1838. When we know what it likes to eat, we could look at planting more of those plants,’ she said. She added that the soon-to-be built Eco-Link – set to cross the Bukit Timah Expressway and link Bukit Timah Nature Reserve to the Central Catchment Nature Reserve – could help extend their habitat.

There is also a possibility of using the leaf monkey, believed to be related, from Johor to help increase the genetic pool.

The banded leaf monkey is one of three primate populations here, along with long-tailed macaques, which number about 1,500, and the nocturnal slow loris, the population of which is unknown.

The study was the first to be supported by the Wildlife Reserves Singapore Conservation Fund, which committed $500,000 over five years to NUS’ Ah Meng Memorial Conservation Fund, set up about a year ago to support this kind of work.

“Galapagos of the Indian Ocean: Christmas Island, Kingdom of Crabs”